This will be a big week, and we have a lot to cover.

First, a big change. As most of you know, Wood Industry has a sister magazine, Coverings, for people that sell, install and design floorcovering products in Canada. When we started the Supply Side newsletter some time back, we addressed only the wood side, since there were issues needing addressing that affected only the wood industry. However, there is much to recommend combining the suppliers’ news for both, to include both serving family businesses in Canada and both dealing with the “occupied space” sector in Canada. Also, there is a fair amount of crossover between such topics as installation, adhesives, coatings, safety, costs of compliance, etc.

In any event, I would like to welcome the suppliers to the Coverings magazine audience to this monthly industry chat. As usual, you will find it different from the run-of-the-mill e-blasts. It comes once a month, has commentary and opinion and provides a different perspective on marketing, business and government. Folks that want to advertise will find the extra audience comes with no charge.

Next, by now you may have heard, but you should give consideration to any on-line meetings you are conducting with Zoom. Here is a little inside baseball from my daily workflow from the Columbia Journalism Review. Many organizations have taken to on-line meeting for their confidential strategy meetings, and Zoom has proven questionable. My personal attitude toward such things has typically been, “Who cares? There’s too much stuff flying around for them to pay attention to it all.” However, another take might be to wonder why they created a program that could harvest that much data and then not use it.

Be cautious about the way you view statistics. Even if you always filter them, it’s a new day. For example, the new jobless numbers came out last week. Following the same-old formats, news organizations are reporting these as jobs “lost.” I think a new category has imposed itself on the landscape, that being “jobs paused.”

This matters. Your customers, my readers, are looking at a heaving horizon. Is their business going this way or that way? And nobody knows.

I don’t have any criticism of either Trump or Trudeau at this point. Leaders are elected, they do what they can in a crisis with the resources available, and they are subject to recall if their personal interests run amok.

However, my take is that we will not, as Trump indicates, return to business as usual. Try looking out the window of one of your customers’ factories and stores. Those business owners and managers have to sell into a market.

My uncle was a radio operator in the U.S. Marines on Iwo Jima during WWII. He told the story of the Japanese knowing that radio operators were a critical link in the organization of the attack, so they got his position in the daytime, and at night would roll out the artillery. After one night’s bombardment, he said, he could stand up in his foxhole and place each hand in different shell holes. He thanked his drill instructor for being a punishing teacher on how to dig a proper foxhole, and he said that night turned his life forever to the service of God. He did, too. He believed that prayers are answered. He died a few years back, following many returns to Iwo Jima, meeting with survivors on both sides and a life of contemplation on those events.

I think North America has dug a proper foxhole, but there will be losses. Your customers will look out when this is over and see many local retailers and restaurants out of business, never to return. I will be interested to see who is the first act when we’re told it’s over – who is first to throw a yard party, go to a concert or open a showroom. My sense is that even when the government gives the all-clear, business owners will be shell-shocked to inaction. Nobody will want to go first.

This will affect housing. It is hard to imagine any of us coming out of this with the same net worth as going in. For one, nobody will want to buy a house at last January’s values. Not right away. The same is true of commercial property. You cannot kill 20 percent of a country’s net production (for lack of a better number) with no effect. I think. On the other hand, many countries in Europe and elsewhere have a long tradition of shutting down for weeks or months every summer and argue that it works like pruning a coleus. Further, North Americans are known for taking the bull by the horns, so we’ll see.

Another issue will be inflation. A government cannot replace its own economy any more than a tick can create a deer. Governments don’t produce anything. They tax and administer, and they can print money. Inflation can be expected. This will also affect people’s net worth as they try to replace durable goods, but we will also likely see an offset as petroleum products will, in my view, recover a bit but remain low. What will happen if durable goods inflate while housing values fall? The old paradigm is broken and will not be restored.

Locally for me, the government has now closed all parks, forests and trails. This is a puzzle to me, as the government has mandated a two-meter social distance, and these areas are among the last refuges from solitary confinement – recognized in the Geneva Conventions as inhumane punishment. Anybody that blocks off forests, parks and trails to enforce a six-foot social-distance mandate either has information we don’t, or they are taking advantage of their secret, Double-0-Zero number – the licence to be idiots. May I call them Wussie Galore?

I know. I said I would not criticize either leader, and I won’t. However, I would advise them both to avoid giving unrestricted power to ensconced bureaucrats for their advantage in a crisis. Bureaucrats have an unbroken history of greed and overreach with their authority and unbroken history of being slow-to-nonresponsive in giving it back. A relevant question would be to ask every bureaucrat in the audience that has lost even one day’s pay as the result of this national crisis to please raise his or her hand.

I hate to keep beating the same drum, but does anybody else think it’s eerie that there is such profound silence from the unions? 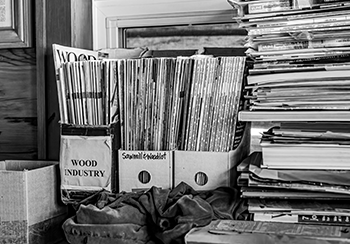 Looking out the windows of the White House or Gorffwysfa (24 Sussex), the perspective is different from that of a business owner. My guess is that the top priority, next to defence, is food supply and agriculture. Agriculture is seasonal, and we simply cannot afford a pause in the spring planting season. Following on, agriculture needs fuel, fertilizer, seed, feed, parts, veterinary supplies, labour, etc. We already see some of the exceptions made for agriculture in the admittance back into Canada of its seasonal workers.

There is something else the leaders are considering. The U.S., I hear, has the most comprehensive testing system now in the world. According to the newly available data, New York is far in the lead with a .007 infection rate. California has one per thousand. Some states have less than one-half per thousand. Some states have less than .05 percent. So pick your number. I’ll say for the sake of argument that the measured rate of infection now, right before the predicted peak, is running at two percent.

Of that two percent, 98 percent will recover. Of the two percent that will be fatalities, over 60 percent are over 60, and of those fatalities over 60 years of age, 80 percent have three or more risk factors. The top is high blood pressure. Next is diabetes. Next is cardio-vascular disease. Et cetera.

My guess is that the White House and Gorffwysfa will need to make a hard leadership decision, if those figures hold up.

Following agriculture, construction will have to be energized. Maintenance and repair cannot wait long, and construction on new housing, institutions, businesses and industries must occur to accommodate those people coming here from abroad, leaving school or home to start new lives and people changing from one living situation to another.

Construction cannot move, however, without manufacturing and flooring, which is where your customers come in. Houses cannot be sold without windows, stairs and cabinets. Institutions cannot function without work stations, and the beginning of every design is the floor.

I guess I should note, once more, that the opinions herein are just me talkin’. I can be as wrong as the next guy. However, we have never felt that editing a professional journal somehow wraps us with the golden cloak of expertise. In fact, when others in the media do it, we find it too irksome to bear. And the irk factor goes up exponentially when their “expertise” extends no further than repurposing their Google searches (coming soon to Zoom).

At the moment, whether anybody wants to argue or not, Wood Industry and Coverings have the fastest, broadest most-trusted communications media in their respective industry. We are standing by to help you, with ads or with PSAs or marketing help, with creative or with help on any initiative that makes sense.

As that famous old philosopher and sage, Red Green always said, “We’re all in this together. Keep your stick on the ice.”